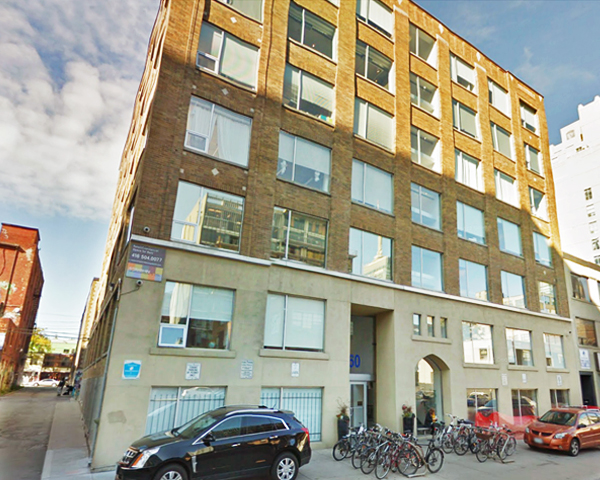 From 2000 to 2003 460 was renovated to make the building greener and more energy efficient.

460 is located in the heart of the Downtown West, on the north side of Richmond Street, between Spadina Avenue and Bathurst Street. The Downtown West is one of the most vibrant areas of Toronto with residential and commercial redevelopment. It continues to attract a range of creative businesses, IT , design, fashion sales, architectural and engineering services and a growing entertainment activity. The area is well serviced by the Gardiner Expressway and a supporting network of metropolitan routes including University and Spadina Avenues, Bathurst and Yonge Streets. The Spadina Avenue Bridge was replaced and widened over the Railway lands with completion in 1990. With connections to the Bloor and Spadina subway lines via the Spadina LRT, as well as the Harbourfront LRT, this significantly improves transit access through Downtown West.
The building backs onto Toronto’s landmark “graffitti alley” with easy access to Queen, and Spadina.

Land uses within the area are regulated by the City of Toronto’s Zoning By-Law No. 438-86 variously amended by City Council and the Ontario Municipal Board. According to this By-Law the property is situated within a zone designated to support “RA” – Reinvestment Area Districts. General uses permitted under the “RA Zone ” include just about everything but heavy industrial. 460 currently caters to office and retail uses.
Legal Description: The subject property is legally described as 460 Richmond St. West, Plan D89, Lots 6 to 8 and part of Lot 9

The building was completely gutted and renovated between 2000 and 2003. The renovation included multiple changes that make the building greener and more energy efficient, keeping with management’s montra that, “the greenest building is the one the already exists”. You cannot recapture the carbon deficit incurred when you tear down a building and rebuild, no matter how green you make the new building.

Serviced by two elevators (1 passenger and 1 freight), it is fully air-conditioned, has new double-glazed argon-filled windows,new insulation and has hardwood floors throughout, except for the ground floor which is terrazzo. For its energy efficiency improvements it received an award from the Government of Canada, which hangs in the lobby. The building is also completely “connected” offering Bell or Beanfield Fibre throughout.